I’m feeling awful again today.  I got up late and kept going back to bed.  I knew it would be hard coming back from holiday, but I didn’t realise just how far backwards I would go.  I know I need structure, but I’m worried about the stuff I have coming up in the next week or two.  I worry about even managing to get to these things on time (I’m basically nocturnal at the moment) let alone get through them.

I’ve got a meeting with a careers charity on Friday, a different one to the one I saw on Monday, not a specifically autism/mental health one, to talk about alternative careers and interview practice, but I’m worried I’m not going to say much and it’s mostly going to be me being told I’m doing everything wrong (that’s how the previous meeting there felt, a bit).  Then it’s going to be hectic to get home in good time before Shabbat.  Then next week I have a day long seminar thing on building a second career (I never really built the first one…).  I just got an email about it; it’s a series of talks over the day, but apparently “Morning and afternoon refreshments, together with lunch, are complimentary, and an important networking part of the day.”  Scary.  I might try to stay for refreshments, but, even aside from kashrut questions (the charity running the seminar is Jewish, but not religious, so it might not be kosher enough for me), I think I will need to get away from everyone for an hour if I am to have any hope of staying in the talks for the whole day.  Oh, and weirdly one of the speakers is the rabbi who was my shul rabbi growing up; he eventually quit the rabbinate and went into finance in which capacity he’s speaking.

I’m struggling with concentration and motivation again.  It’s hard to feel that I could be working in this state, yet I feel I should.  I discussed this with someone else online today, that I feel I should be working, even if part-time.  It’s partly that I don’t like being dependent on my parents, partly social expectation, part genuine feeling that I want to do something meaningful with my life.  Plus, although I’m going to have another go at applying for benefits, I doubt very much that I would qualify for sickness benefits.  I’m too functional.  It’s very difficult to claim benefits for mental illness as the system is essentially based around physical incapacity.  If you can see and walk and don’t need constant care it’s difficult to meet the burden of proof for being disabled.  I’m sceptical of whether I will get unemployment benefits, but I need to try and apply while I’m still in a period where I worked significantly in the last two tax years.

I did manage to do a few things.  I went for a walk and picked up my blood test form for my next blood test (I have them every three months on lithium tablets).  At the doctor’s surgery I saw someone I dated a number of years ago who dumped me as soon as I said I had mental health issues.  She lives locally, so I run into her from time to time although we haven’t spoken; I’m not sure if I’m good at hiding or she’s good at pretending not to see me.  (I suppose I’m pretending not to see her, really.)

I wrote a devar Torah (Torah thought) for Shabbat (the Sabbath), which took an hour, but I was pretty exhausted afterwards.  I did the slightly naughty rabbinic trick of writing about what I wanted to write about and tying it in to the parasha (weekly Torah reading).  Actually, that’s not entirely true; it’s more that I thought there was a link, and there was, but then when I sat down to write it, the link wasn’t as strong as I thought, but I carried on anyway.  I tried to work on my novel for an hour too and wrote a bit, but then decided that my narrator was acting out of character and the incident should happen later in the chapter, in a different context and perhaps a different way.  So I’m left with a shorter chapter than I started with, and a fragment to be reworked later.  But it’s too late to work on that tonight.  I need to find a way of getting more time to work on my novel, but it’s hard when I’m expected to make job hunting my “job” and still fit in chores, exercise and the like as well as coping with poor concentration and motivation.

I mentioned the other day about unfollowing a blog because the blogger said something that I felt was dismissive about mental illness and didn’t respond to my polite response.  Well, she just responded today and said she thought she had responded at the time, but her comment didn’t post properly and she only just realised.  I believe her, because I’ve been reading her blog for years and she’s never struck me as the type of person to casually lie or act rudely, and if she didn’t want to respond at all, why respond now?  (She can’t see that I unfollowed her because she posts on Blogger and it doesn’t show that I was following her on WordPress.)  But I’m undecided about following the blog again as I feel I do seem to end up with differences of opinion with her a lot.  But then again, maybe it’s good for me to see that I can open up to someone with very different opinions to my own, and disagree, and we still stay friends.  In the past we have often disagreed on matters “safely.”  That’s something I do struggle to accept; I usually keep quiet about differences for fear of rejection.

It’s also been a day when I’ve wandered into political stuff online again, which just depresses me beyond measure.  The flare-up of fighting in Israel depresses and worries me too; I was within range of some of the 360 rockets fired from Gaza just a few days ago.  Cousin 3 lives in the south of Israel, which is the most dangerous place for rockets.  It’s scary.

Speaking of which, some photos from my trip. 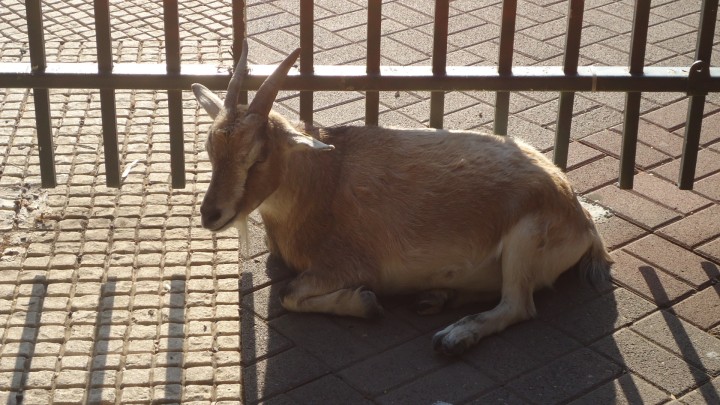 10 thoughts on “Kill Your Darlings (not your Daleks)”